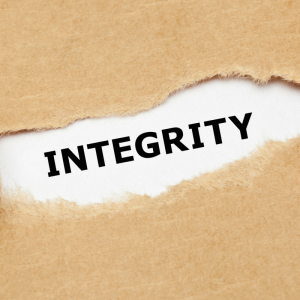 Honesty is Always the Best Policy.  At least that’s what the poster says.

But aren’t there exceptions to every rule?

, doesn’t think so.  He insisted, “The most influential persuasion tool in your entire arsenal is your integrity.”

Your decisions reflect who you are and what you value.  Integrity is a Swiss army knife in your tool box of values.  Others may hear your words, but they believe your actions.

I value honesty.  Integrity was a quality that was shaped in childhood by less-than-comfortable circumstances and saved me from tripping over my own tongue on more than one occasion.

As a teacher, I loved the sounds of buzzing conversations and students engaged in active learning, but I also valued structure and organization.  The classroom was the only place many of my seventh grade urban students experienced structure and security.

I built time into the schedule to restore order in the room at the end of every class period.  On one particular afternoon, I was tired.  And cranky.  And I had a headache.  My grouchiness increased as I weaved between small groups of students while picking up carelessly-tossed wads of paper on the floor,

“Please use the trash can,” I thoughtlessly shouted.  “I am tired of picking your stuff off of the floor.”  I wish I had said “stuff.”

I was more shocked than my students when I heard – we heard – a profanity fall out of my mouth.

The students leaned towards me.  Words on a black-and-white poster on the wall glared at me:  Honesty is Always the Best Policy.

I had choices.  I could lie, say they misunderstood what I said, and accuse them of inciting an argument.  I could act like nothing happened.  I had five seconds to make a decision.

I tried lying when I was in third grade.  It didn’t work out very well.  But I remembered the lesson.

When I was in third grade, the athletic club at my parochial elementary school sponsored an annual fundraiser.  Students sold paper stickers with the words “Proud Sponsor of the Corpus Christi Athletic Club” for one dollar.  The boy and girl who sold the most stickers received ten dollars.  I wanted to be the top-selling award-winning girl in the school.

I asked my teacher for ten stickers.  The following day, I asked for ten more stickers.

“Did you sell the ten stickers I gave you yesterday?” she inquired.

Two weeks later, I had a collection of 80 stickers hidden under my socks in a drawer.

On the last day of the fundraising drive, I cried and refused to go to school.  I told my mom what happened.  I thought I could sell them, but I couldn’t.  She pulled her checkbook out of her purse and began to write a check for ten dollars.

“What are you doing?” my father asked.

I tried to look pitiful and small.

“Absolutely not,” he insisted.

And then he spoke the words that changed my perspective about truth and truth-telling for the rest of my life.

“She got herself into this,” he replied.  “She can get herself out of it.”

I wanted to die.  Well, not die.  I wished I lived in another country.  On another planet.

I didn’t know how to explain the truth to my teacher.  I was late for my first class because I trudged very slowly to school.  I didn’t want my teacher to know that I lied.  I think she already knew.

I crept into the classroom and quietly returned the stickers to my teacher.  All 80 of them.

“But didn’t you say you sold all of the stickers?” asked my teacher.

She said nothing.  I was grateful.

My classmates, however, were not as kind as my teacher.

“What happened?” they asked.  “I thought you said you sold all of the stickers?”

“I lied” was a miserable mantra I repeated throughout the rest of the day.  At the end of the painfully long afternoon, I knew one truth:  My words and actions have consequences.

Fast-forward to this uncomfortable situation with my students.  Their eyes glistened.  I could tell by their trust-filled expressions that they expected a response from me.

“Something just happened, didn’t it?” I asked.

“I’m sure this wasn’t the case,” I continued, trying not to laugh.  “But there’s a chance I might have said something inappropriate.  Is that true?”

“I am so sorry,” I apologized.  “You deserve to be spoken to with respect.”

“Oh, don’t worry about it, Miss Connor,” Jordan laughed.  “We talk a lot worse than that!”

“You could have lied,” said Toya.

“Yes, I could have lied,” I agreed.  “But we both would have known the truth.”

They nodded.  Our honesty with one another led us into a deeper relationship that was grounded in mutual trust and class continued.  Order had been restored.

Later that afternoon, the principal advised me to be careful while I was driving home after school.

“It’s raining cats and dogs out there!” he warned.

Now, I knew better than to believe that.  Cats and dogs were not falling out of the sky.

But, did I just hear thunder … or was it barking?

Do you value integrity?

These tips offer ways to Use Your Core Values to Make Moral Decisions.

Use these suggestions to Teach Youth How to Communicate & Resolve Conflict.

Integrity is an important attribute of leaders. 10 Top Tips to Be a Successful Leader describe important leadership attributes.

Norms set boundaries within groups that deepen communication. Find out how to Create Group Norms That Build Trust.