The word “feminism” stirs up a war of emotion based on one’s understanding (or misunderstanding) of the word. Kathy Frankovic, a public opinion polling expert, conducted a large-scale survey to examine how men and women define “feminism.” Many of the participants in her poll called feminism “liberal,” “stupid,” “radical,” and “extreme.”

Few of the participants claimed to support feminism beliefs – before they heard a dictionary definition of the word. Frankovic said, “Most people don’t want to call themselves feminists – but many people change their minds when feminism is associated with equality.”

Merriam-Webster Dictionary defines feminism as “the belief that women and men should have equal rights and opportunities.”

“Today, gender bias continues to create huge barriers for many women,” contends the American Civil Liberties Union (ACLU). “Ongoing struggles include ensuring equal economic opportunities, educational equity, and an end to gender-based violence.” Though there has been remarkable progress in gender equality throughout the last 150 years, women continue to face discrimination, violence, and institutional obstacles that block educational, employment, and leadership opportunities.

“The story of women’s struggle for equality belongs to no single feminist nor to any one organization but to the collective efforts of all who care about human rights,” says political activist Gloria Steinem. She adds, “The art of acting morally is behaving as if everything we do matters.” Equality strengthens the relationships between all of us.

Contributions of women across professions – including engineering, mathematics, literature, science, and government – inspire men, women, and most importantly, our children. These words of inspiration from strong men and women offer universal encouragement and support full equality of our entire citizenry:

The earth is the mother of all people and all people should have equal rights upon it. – Chief Joseph

You must be the change you wish to see in the world. – Mahatma Gandhi

Gender equality is not a woman’s issue. It is a human issue. It affects all of us. – Elizabeth Nyamayaro

I’m a feminist. I’ve been a female for a long time now. It’d be stupid not to be on my own side. – Maya Angelou

It is time that we all see gender as a spectrum instead of two sets of opposing ideals. We should stop defining each other by what we are not and start defining ourselves by who we are. –Emma Watson

No country can ever truly flourish if it stifles the potential of its women and deprives itself of the contributions of half its citizens. – Michelle Obama

The education and empowerment of women throughout the world cannot fail to result in a more caring, tolerant, just and peaceful life for all. – Aung San Suu Kyi

No struggle can ever succeed without women participating side by side with men. – Muhammad Ali Jinnah 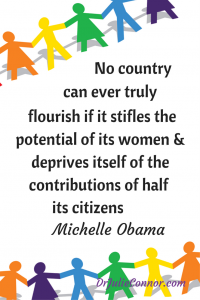 Our lives begin to end the day we become silent about things that matter.  – Dr. Martin Luther King, Jr.

One of the most sincere forms of respect is actually listening to what another has to say. – Bryant H. McGill

Equality is the soul of liberty; there is, in fact, no liberty without it.  – Francis Wright

We are not created equal. We are are not carbon copies of one another. Each one of us possesses a unique set of gifts and talents. We also have individual challenges and personal hardships.

Every new day provides us with opportunities to share our strengths and face challenges – together. When we support and encourage each other, we have opportunities to celebrate greater equality and mutual respect.

What can you do to think and act in ways that reflect a vision of equality?

Kids and teens talk about controversial subjects at school.  Join the conversation with tips from Politics, God, Race, Sex, & Other Controversial Topics Kids Discuss at School.

Some people (like me) don’t have children, but we can parent in unexpected ways. There’s more in Motherhood is a Matter of Perspective.

Use these suggestions from How to Be a Good Role Model to examine ways you can inspire young people.

Invite teens into conversations about current issues with tips from Hear the Voice of Our Youth.

A 30-something businessman shared advice for 20 year-olds that is meaningful for seniors. Read What 50+ Women Can Learn from a 30+ Entrepreneur.