How to Talk to Teens About Social Issues 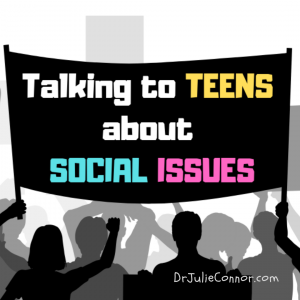 After speaking at a leadership conference, I left a hotel in downtown Atlanta to look for a good place to eat.  A large crowd of young demonstrators poured into the streets.

They held signs with powerful messages such as “Stand Up to Racism,” “Black Lives Matter,” and “Pro-Black does not mean Anti-White.”  It was a peaceful protest that cried out for social justice.

“If you don’t stand up for injustice, you quietly allow it,” insisted Attiyah Ali.  “If we all go in our separate corners by religion, race, color, and dig our heels in the ground, we’re never going to come up with a solution.”

“We are standing together as a unit, as a people, regardless of black, white, Chinese, Mexican, Asian,” agreed a young protester.  “It doesn’t matter what you are or who you are, at the end of the day, today is the day we need to stand.”

Kasim Reed, former mayor of Atlanta, was among those gathered at the demonstration.  His presence showed the demonstrators that he valued what they had to say.  And he wanted to listen.

“I understand this is this generation’s protest,” said Reed.  “Let this be the best version of ourselves.”

It may feel uncomfortable to hear negative criticism from the mouths of teens and young adults, but we have a responsibility to listen.  More than half of the world’s population is under the age of 30.  Katja Iversen, CEO of Women Deliver, maintains, “That means that more than 3.5 billion young people represent 3.5 billion opportunities for change.”

Teens mature into volunteers, activists, community leaders, and elected officials when they have opportunities to join in the dialogue about critical issues that are important to all of us.  We invite them into active involvement at local events and organizations by listening to them and providing safe opportunities to express their thoughts and opinions:

Many adults claim that teens are our future – but they are more than our future; they have something critically important to add to social discussions today. In the present. Now.

Teens are tuned in to current events and aware of social concerns. They are hungry to join the discussion. And they are starving for opportunities to dialogue with adults who will listen to them.

Civil rights activist, Martin Luther King, Jr., believed, “Our lives begin to end the day we become silent about things that matter.” The only way to build relationships with our youth is through dialogue. The only way to ignite their interest in political and social activism is to let them know that their participation matters. That they matter.

Young adults are far less likely to vote than older citizens. When we do not value what they have to say about political issues, the power of elected government is weakened. 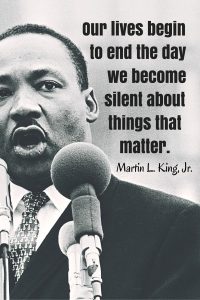 In his most famous speech, The Gettysburg Address, President Abraham Lincoln rallied the importance of our entire citizenry; claiming “that this nation, under God, shall have a new birth of freedom – and that government of the people, by the people, for the people shall not perish from the earth.”

Tears streamed down my cheeks as I stood, with my hand over my heart, and watched the young men and women march down the streets of downtown Atlanta. I admired their courage to speak out against injustice and to stand together in solidarity. I could not have been more proud of them.

I felt proud to be an American.

Our youth are speaking out. Are you listening?

How can you become a better listener?

Kids are talking about everything they’re not supposed to talk about. Here’s what you can do to join the dialogue about Politics, God, Race, Sex, and Other Controversial Topics Kids Discuss at School.

Use these suggestions from How to Be a Good Role Model to pump up the example you want to inspire teens.

If you want to involve more young people in your organization, check out these tips from What You Must Do to Invite & Involve Youth (So They Want to Stay).

Encourage youth to explore their passions. Discover Why We Must Talk to Young People About Their Dreams.