Where Are You, Christmas? 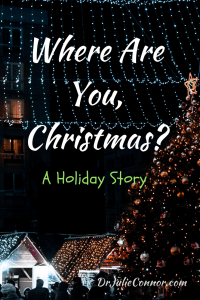 Oprah Winfrey believes, “The more you praise and celebrate your life, the more there is in life to celebrate.”

It’s hard to celebrate if you feel exhausted.  Or stressed.  Or burned-out.

“I am so tired,” sighed a frazzled single mother on Facebook. “Where are you, Christmas?  I hope you find me.”

During the holiday season, people sometimes hunger for something that can transform us.  We hope a bit of the Christmas story will provide a reason to celebrate.

No one can tell a story like Bill McClellan, seasoned columnist at the St. Louis Post-Dispatch.   About 25 years ago, Bill described the theft of a plastic Baby Jesus that was snatched from a manger in Ted and Liz Laspes’ front yard.

Every year, Ted Laspe carefully placed the Infant Christ in His plastic bed next to His plastic parents, Mary and Joseph, at midnight on December 25th.  Jesus disappeared from the manger shortly after His appearance in 1993.  Ted was furious.

Every year, the people wait for Baby Jesus to arrive again on Christmas Eve.  He will come to a house where Ted Laspe used to live.  Laspe died in October.  He was only 47 and had been in relatively good health until he had open-heart surgery.

He seldom talked about his own troubles. Maybe that’s because he was aware that many people had more severe problems.  He spent much of his time looking after the neighborhood’s shut-ins.  He was always available to do errands or take people shopping.  He used to visit one elderly woman because he knew how much she needed company.

He had an old plastic Nativity scene he used to proudly display in front of his house every year. Three Wise Men, two sheep, one camel, one donkey, one shepherd, and, of course, Joseph and Mary. All were huddled around the crib that held Baby Jesus. It went up well before Christmas and it stayed up well after Christmas.

When Laspe was ready to pack up the Nativity scene, he discovered Baby Jesus was not in his crib. On the plastic hay was a note. “Dear Ted, On vacation — Be back Christmas Eve.” Laspe talked to all his neighbors. They denied knowing anything about the missing Baby Jesus.

The Laspes received the first postcard a month later in February. It was from Colorado:

“Having a great time. The mountains are wonderful — close to heaven!  Gotta go. Hi to Liz. Love, Jesus.”

Two weeks after that, another postcard came from Phoenix. The following week, the Laspes got a postcard from California. Postcards arrived from Wisconsin, Minnesota, and Arkansas. All were signed, “Love, Jesus. See you on Christmas Eve.”

In August, Baby Jesus appeared in photographs on the beach in Mexico, in the mountains of Utah, and casinos of Las Vegas. Postcards arrived from New York to California. One photograph was a stewardess holding Baby Jesus at the airport.

“Took some time off to make sure Ted got settled in. He wanted me to tell you that he’s doing just fine and feels terrific. He loves you very much and he wants you to know he’s always with you. Love, Jesus.” 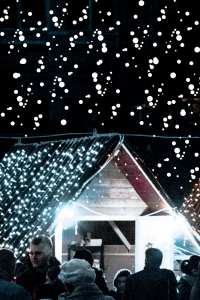 Liz and her neighbors gathered around the Nativity scene on December 24th  and waited for his arrival.

A baffled cabdriver parked his taxi in front of the Lapse home. He said he had come from the airport.

He led Liz to his cab and asked her, “Do you know anything about this?”

Plastic Baby Jesus was on a seat in the back of the cab. He leaned against a suitcase covered with teddy bear stickers. Liz found souvenirs and travel trinkets, a toothbrush and sunglasses, postcards and stamps within the worn suitcase.

And there was a small box filled with miniature Baby Jesuses. Special instructions asked Liz to share the Christ figurines with all of those waiting for the Baby’s return as a reminder to share the gift of love with one another.

The Greek word Christ, or Christos, means “anointed.”  Throughout the centuries, people used rites of anointing as an outward expression of our inward recognition of the Divine in one another.

We are anointed Divine expressions of grace.

Blessed are the pure of heart for they will see God. (Matt 5:8).

The kingdom of heaven is within you.  Where it’s always been.  And that’s where you will find Christmas.

How can you share holiday joy with someone you care about?

There are people who inspire us in unexpected places. Read about Guardian Angel in this urban school.

Did you ever wonder why a partridge is in a pear tree?  Find out in 12 Days of Christmas & Hope for a New Year.

Rekindle your fire with 11 Inspiring Quotes When You Need Encouragement.

Thinking about your resolutions for the new year? Find out How to Write Awesome Resolutions.